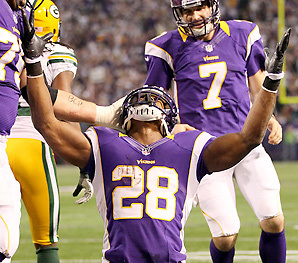 Time to look at fantasy running backs, and as far as this season goes it is thin. Like Victoria Beckham thin. I am not sure whether or not that makes me sound more old or feminine, but either way, I don’t have time for that. The running back class needs my attention, and I see it falling in one of four categories. It’s simple. Let’s label this in terms most common drinkers, like myself, would understand.

A rare collection crafted from the precious casks

This is the cream of the crop time. It is your only chance to get a guy separate from the rest of the pack.

Yes, his average yards per carry over the last three years have gone down from 4.9 in 2010, to 4.1 in 2012, but he is still as close to a sure thing as you can get. He might as well be a touchdown-making robot sent from the future.  He has 41 over the last three seasons despite missing some time due to injury. This team is bound to have some luck from the health Gods, and him even more looks at the end zone.

He is a freak. Plain and simple. I have personally had three knee injuries and two surgeries. He came back so quick and easily; he made me feel like a lesser mortal. 12 touchdowns each of the last three years, and that’s not the most impressive part. I know people are worried about a let down from last year, but even that would be way above all the rest. He averages 5 yards per carry in his career, and is still the most talented back in the NFL.

I know there are fears he might just be a flash in the pan, but as far as young running backs go, this is the guy I want. His big play ability is way above any other. In one game alone last year he amassed 251 yards and 4 touchdowns. The greatness has only begun, and he’s about to hit the age of running backs when they are in their prime.  The “Muscle Hamster” finished third among fantasy running backs last year and is primed to take over the number one spot.

I had my doubts about him. I wondered each year if he was being oversold.  I was wrong. The guy finished last year with nearly 1,800 all purpose yards, and that was with a rookie quarterback. 10 games with 100 yards last season should help convince you as well. But the best part of Lynch’s game though is he is the goal line back. You know he will be there inside 5 yards, and that is a comforting feeling. Trust me… in “Beast Mode” I trust.

A sophisticated blend crafted for a selective gathering

If you can’t get any of the first four, these are the guys that should be next on your list. Potential and talent lead this group.

He fought the injury bug at times but still managed a very productive season. He had five games with at least 100 yards, and consistently has proven he is a home run threat. Problem is, he still isn’t the Bills choice for the goal line push. Instead, Fred Jackson is the man they like to call on close to the end zone. Regardless of his flaws, this team will check the ball down, and Spiller has a chance to be a PPR monster.

Once again, injuries are a concern, especially considering he was just carted off the field in practice a week ago. That being said… he is fun to watch, and his quarterback situation just got much better. He scored double-digit points in 6 of the last 8 games to end 2012, and he was just getting warmed up. He is just one year removed from ACL surgery and already back near the top of the league.

I am sure that some would argue that he deserves to be in my elite group, but his age will catch up with him this year. Listen, all this guy does is get 1,600 yards and better than 10 touchdowns, but father time is 100,000–0 in his career. Time to start worrying. Keeper league players better start looking for a future option, because I feel this is the beginning of the decline. Good news is the end isn’t here yet. He is still the end zone guy, Bernard Pierce will have to prove his chops if he is going to steal 100 plus carries away from him.

Just like I feel like Rice’s star is falling, I feel great about Richardson this season. Cleveland’s QB situation is still unresolved, but the Browns will give him every chance to succeed. Barring some health issues, there is no reason to think he won’t improve off of last season. He scored a touchdown in half of his games in his rookie year, and with no proven passing game I don’t think those numbers will decline. Richardson is a go to this season.

Every year there are guys that either switch teams or get a new chance with a departure leaving them the opportunity for a big season. Time for someone to surprise you

He is the obvious choice for this category. He played on a shit Rams team for an eternity and now has made a switch to a team that looks like the early 2000 Colts in the regular season. I am not calling Matt Ryan, Peyton yet, but this team can move the ball. Two elite wideouts should open up the running game for him. He only got 43 carries inside the opponents 10 last year……Michael Turner had 103. This might be his last big hoo-rah.

The last time the Lions had a great running back was Barry Sanders. God I hope they aren’t looking for that. The good news for Detroit fans is their expectations for a running game are set pretty low. Stafford set a record for pass attempts last season, and they don’t look to change that. The thing that makes this fit work is Reggie Bush’s ability out of the backfield. He is never going to be that goal line guy, but he can catch 60 balls, and run for another 1000 yards. Look for big things from Reggie.

Yes, I know he is on the same team Tom Brady. Yes, I know he had a very good year. But I also know that Brady is missing passing options, is getting older, and would sure like to run the ball a little more. This will be a top ten fantasy running back year for Ridley. He is on a team in the East with no immediate threat (Unless Ryan Tannehill can avoid a sophomore slump) and a coach that loves to use his talent. He has the most upside of anyone in this group.

The first rookie to crack the list so far, and that is for a good reason. He is coming off a national championship, and gets to go right back onto a winning team in need of a running back. The Packers have never seemed committed to the running game, but Lacy might change that. He’s not a speedster, which will concern some, but Green Bay needs a bruiser inside the ten and he gives them that. Practice has also shown that Lacy can hang in on third downs, which is often a pitfall of rookie RBs’ success. He knows how to win and help his team immediately.

Give up now…….all this will do is make you wake up regretting your decision

I have owned him. I have hoped and prayed.  Stick a fork in him…he’s done. He is a perfect example of why a running back’s life in this league in 3.5 years. 2 touchdowns and only three 100-yard games in another injury plagued season leaves me with no choice. Run DMC is dead again, and this is no longer Run’s house.

He’s old. Everyone thought he was due for a big year in 2012, but they were disappointed. You think its hard for McFadden to get healthy… imagine being in the league for as long as MJD. He looked ok for the first few weeks, but missed the rest of the season with an ankle injury. How he is 18 on ESPN for running backs, I don’t know. Be smart and avoid him at all costs.

He’s not old… but he might as well be. He has missed nine of his last 32 career games, and he wasn’t exactly healthy the other 23. Not a great pass catcher yet, he doesn’t get all the 3rd down carries, and isn’t on a great team. Do I need to tell you more? He only had a single 100 yard game last year and that was in week one. He only got 20 carries 3 times last season and I don’t think that work load will continue.

He and Jonathan Stewart deserve to be combined. Mostly because I can’t believe that: A) They both still play and B) They are still teammates. This combo made great fantasy football players pull their hair out years ago when each week it was impossible to predict who was going to shine. Now they share those carries with Cam Newton, and can’t stay on the field. Either way… neither is worth considering. Not unless you can take a time machine, and then still trade them away.