The Introduction to Field-Position Adjusted Stats.

Questions I set out to answer:  How many points is each yard of field position worth in the grand scheme of things? When you pin your opponent inside the 20, how much worse is that for their offense? Who benefited most from stellar field position set up by great defense and special teams and who did the best despite having an anemic supporting cast?

[dropcap style=”inverse”]T[/dropcap]here had to be a quantifiable answer somewhere in the stats, and it probably wasn’t all that far away. It wasn’t going to be in all the pointless drivel about quarterbacks, top 500/100 lists, or the toxic combination, ranking all of the top 32 quarterbacks in the league in tiers. (*Note: I understand the business aspect of it, but if you’re a multi-million dollar company with a ton of viewers, isn’t it your moral responsibility to educate them on what’s actually happening in football, not just throw up some garbage and hope fans get angry enough to re-post it with the comment “This list is garbage”?)  Leave your awful narratives at the door because you’d just be arguing with a computer and some spreadsheets.

That being said, I encourage any questions on my methodologies (Which I’ll admit, could have been better) or theories on why each increment gets more valuable in terms of points, besides the obviously shorter distance to the end zone.

Every statistic was accumulated from pro-football-reference’s database and queries and then analyzed by myself, so thanks to them for being the best, and honestly only, database I’ve experienced on the internet.

How much does each 10 yards really matter?

The first thing that had to be done was accumulating all of the drive data into a spreadsheet to be broken down in different segments of the field, but unfortunately I couldn’t just export all of the data as a CSV file, so we lose a TINY bit of accuracy with the alternative I went down. What was analyzed was the end result of every drive in the 2013 season that started inside your own 10, 20, 30, 40, 50, and then the opponents 50, 40, 30, 20, and 10 yard lines, broken down into 10 yard intervals (99-90 to go, 90-80 to go, … 0-10 to go) and then analyzed for TD%. FG%. Punt%, and virtually every other outcome possible.

As you expected, the closer you start to the opponent’s end zone, the better chance you have of having your drive end in a scoring play. Both the touchdown and field goal percentages rose steadily as the field got shorter, as did the total scoring percentage.

The following a nice pie chart illustrating the volume of drive beginnings in each interval because I didn’t have the time nor desire to create a cool info-graphic showing each part of the field distorted by the amount of drives than began at that point. 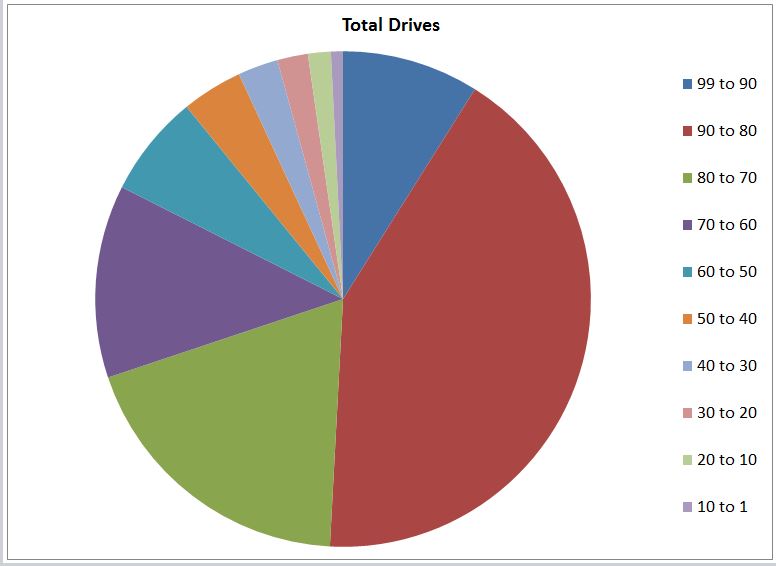 Looking at the both charts, you can draw the conclusion that every single drive that came inside the opponent’s territory was both rare and valuable. I’m sure on a later date, I’ll go through and look at how each drive inside the 50 was created and see how important each turnover you can create was, from preliminary data (and common football sense) we can trust that was the catalyst for the majority of favorable drives. In a quarterback driven league (hope I don’t get sued by one of the major news companies for that line) it’s wild to see how much of quarterback success is driven by defense and special teams. We’ll get more into that in our next segment.

How much did it affect each team?

The following table shows how many drives each team had that started in each of the intervals. For the sake of space, I combined drives that started in your opponent’s 50-20 and red zone into two different columns, but for future formulas they are represented in their original 10 yard sections.

As you can see, there are some teams that had a ton of starts in their opponent’s territory and some that had defenses so inept that they essentially started every drive with a kick return after their opponent walked down the field. Poor Redskins never stood a chance, but how bad was it for them? Let’s take our points per drive from the table above and then combine that with the drives in that interval to see what an NFL-average offense puts up with that same field position:

PROJ PTS: Projected points computed by drives in each interval x that interval’s points per drive + 7 points for each KR, PR, INT, FR, and Other TD.

PROJ-D: The same formula except without D or ST touchdowns.

PROJ- AV O & FP: 20-30 YL SP Points Per Drive (1.7196) x Drives (Assumption is that would be what an Average NFL offense would do if every drive started as a touchback)

DRIVES: Drives recorded (could differ from other databases due to some exclusions of kneel down drives and other possible discrepancies)

DIFF: PPD – P PPD : When looking at it on a level playing field, what teams over-performed and under-performed compared to what they were given by their defense.

One interesting stat that popped off the spreadsheet was the amount of projected points that Kansas City would have scored if they had an average offense for each of those field positions. One stat I saw when looking deeper was their run/pass split was much closer to 50/50 when their drive started after a turnover compared to when it didn’t. Maybe Andy needs to stop calling a bunch of underneath passing routes to boost completion percentage and start doing literally anything else, as their offense was about as effective with their field position as Oakland and Washington were with theirs.

A good comparison I can draw from this is 32 golfers all playing 32 different courses should’t just be evaluated on total strokes. Instead, you have to look at the difficulty and par of each course and draw your conclusions based on that data. We wouldn’t think that a novice shooting a 68 on a par three course is equal to Tiger Woods shooting a 68 at Augusta, but when we don’t account for the other factors that’s what we are doing. Once the offense takes the field, there is nothing they can do about where they started at, just like Tiger can’t change the course at Augusta, they just have to do go out there and do their best, keep the ball in play, and strike when they have the opportunity.

We’re in a golden age of information where we have access to every NFL game of the past 5 years in one click, supercomputers that are able to analyze big data in seconds, and ad-revenue-driven sites that have the resources to provide these resources for us to actually figure out what’s really going on every Sunday. We should have things like this figured out already and fully quantified so we can not only applaud great defense and special teams, but also honestly evaluate offenses for what they did with what they were given, not just the end result.

Instead, we insist on talking about quarterbacks and what they’re doing in bathrooms with twenty dollar bills, or manufactured talking points about the “top 100 players” and we use the same stats we had back in 1970 to decide these debates that are really just there to fill hours of television time and get those oh so valuable clicks to move up those SEO rankings! Thanks for all of the great work you’re doing to advance the football community into the 21st century. It’s really appreciated.

Awfully ran NFL teams aren’t exempt from this hate either.

Look back at that chart of who best performed versus their projected numbers. What do they all have in common? 15 of the 16 have had costly high investments in the running back position and then there’s New England. You don’t have Tom Brady, stop trying to be the Patriots.

“Building around a quarterback just to do it, not because the quarterback is worth building around, isn’t a great idea if you actually want to win football games, just go ahead and ask the Falcons or Dolphins.”

Building around a quarterback just to do it, not because the quarterback is worth building around, isn’t a great idea if you actually want to win football games, just go ahead and ask the Falcons or Dolphins.  But of course, despite evidence that they are still important, the running back position is dying or going extinct or whatever the narrative is this week. Adrian Peterson literally carried 220 pounds of useless quarterback down the field week after week, but the ideology in the NFL War Rooms is you can’t possibly develop unless you draft a quarterback in the top 3, which leads me to my next point.

Just because you draft a guy 3rd overall doesn’t mean he’s magically going to be as successful as other quarterbacks taken there. You obviously don’t understand stats. They don’t work like that. Blake Bortles didn’t just become a franchise quarterback overnight because you kept telling people he was one and you selected him where other franchise quarterbacks have been previously selected. He’s still the same guy he would have been at pick 32, just like paying a guy a $20 million a year deal doesn’t magically make him a $20 million a year quarterback.

If I would have told you 50 years ago that RBIs don’t best measure how well someone creates runs, points are the best indicator for a great basketball player, or the amount of wins a pitcher has is largely out of their control, you’d probably had laughed. Sadly, we’re still at that point in football. People don’t like things to be adjusted because we’re still stuck on milestones that don’t mean anything, and statistics that are limited, at best. Hopefully, this small look into field position can raise some heads out of the sand at how little we truly do know about what’s going on every Sunday.

**Addendum: The following was my methodology:

I didn’t get the total points scored for each of the drive segments, so I had to instead backwards compute it using a formula of (6.5 * TD + 3 * FG) / Drives = Points Per Drive. This left a couple of points unaccounted for, but the difference was negligible. Another issue was the lack of accounting for drives where the clock ended the drive, but I removed all of those because I didn’t want kneel-downs affecting anything in a bad way. All in all, those balanced out and I’m happy with how close these numbers are to the actual numbers.